Failure to Treat Juandice in Newborns

Whether noticeable or not, almost every newborn has some level of jaundice in their first couple of weeks of life. 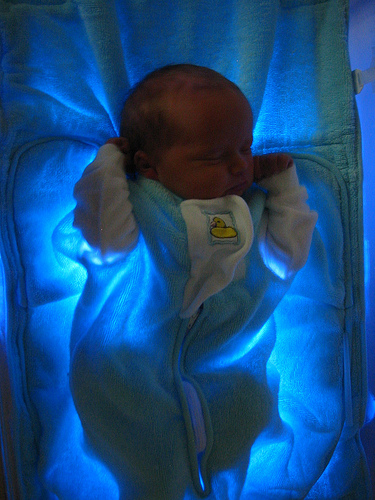 A developing baby relies on his mothers liver to filter his blood while inutero. Once the umbilical cord is cut, it takes his own liver a few days to catch up. In the meantime a buildup of certain blood byproducts may cause the baby to appear yellow. Most cases of jaundice clear up in less than two weeks, with the doctor suggesting lots of fluids for the baby in order to help flush his system. There are, however, some babies that require more medical attention for the condition before it leads to serious complications. If your newborn is now permanently disabled as a result of improperly treated jaundice, contact a medical malpractice lawyer immediately. There are risk factors for some newborns that your obstetrician and pediatrician should look for in every patient.

Any noticeable trace of jaundice in an infant’s first 24 hours needs immediate monitoring and treatment. If there is any incompatibility between the mother’s blood and the babies, that child is at a higher risk for developing jaundice. A woman’s blood type is routinely checked at the beginning of pregnancy. If they are at risk for an incompatibility with their baby, blood tests should be performed periodically throughout the pregnancy to monitor the babies health.

Jaundice complications are extremely rare and generally do not occur as long as it is recognized and treated immediately.

When Jaundice is Left Untreated

There is a young Missouri boy who now has to live with cerebral palsy for the rest of his life as a result of his physicians not treating his jaundice in time. Tragically, he was born perfectly healthy yet developed the yellow skin tint after 23 hours. Doctors failed to note the significance of blood incompatibility with his mother and let his parents take him home, untreated, after only 41 hours. His parents were told that the jaundice was normal and would clear up on its own. By 5 days old, the babies health had rapidly declined and his parents took him to a children’s hospital where he was diagnosed with severe kernicterus, a rare, irreversible, brain injury.

The family filed a lawsuit against the hospital and two of its physicians. The life care plan for their child was $27 million, on top of the $373,000 in medical bills. The hospital and its doctors were grossly underinsured, and the family had no choice but to settle for their insurance policy limits, plus small personal contributions from the defendants. The settlement total in the end was $4.3 million.

A case like this one would have been completely avoided had the hospital and staff followed a well known standard of care for newborn babies. Instead, they ignored the risks to this particular child and he lost the ability to lead a happy, productive life as result. If your newborns jaundice was allowed to progress to the point of harm by his pediatrician, contact a St. Louis birth injury lawyer at the Zevan and Davidson Law Firm.