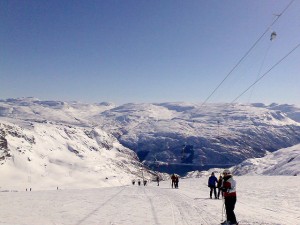 Ski hills and resorts do not immediately spring to mind when you think of amusement parks.

The truth is that ski slopes can provide conditions that are very similar to amusement parks, and can be just as risky. Skiing and snowboarding offer a thrill similar to that of a roller coaster and can be dangerous.

A Wyoming ski hill was the site of a serious accident on December 24, 2010. In the city of Casper, one resident took her five year old daughter skiing at a city owned facility, Hogadon. But a terrible collision between a snowboarder and the little girl, left them both dead and the mother severely injured. The resulting lawsuit that the mother filed is classified as an amusement park accident.

The mother took her daughter to the ski area at Hogadon known as Dreadnaught Run. The conditions of the run were described as “slick” when the accident occurred. The mother and daughter had started off down the run, but halfway down, the little girl’s skis fell off and the two stopped to fix the problem. At the same time a man snowboarding came down the slope at around 50 miles per hour on his snowboard. He collided with the mother and daughter.

The man had been cited for dangerous behavior previously and was known to be an aggressive snowboarder on the slopes, sometimes behaving recklessly. Several witnesses reported that he appeared to be intoxicated earlier in the day and an autopsy showed that he did have trace amount of cannabinoids in his system at the time of the accident.

The family of the little girl filed an amusement park lawsuit against the City of Casper and the Casper Mountain Ski Patrol, alleging that the ski patrol had been aware of the man’s history of reckless behavior and did not warn the family or others on the slopes, and that the man’s actions remained unrestricted.

This accident is truly tragic because it resulted in the death of a child, in a season that is supposed to be about joy, on a day when the family planned to enjoy spending time together on the slopes. The lawsuit claims that there should have been warnings and that the negligent man should not have been allowed unrestricted access to the slopes if he was known to behave in a way that could endanger others. The lawsuit claims that because of this and because the City of Casper and the Casper Mountain Ski Patrol failed to issue a warning about the man’s potentially dangerous behavior, they are responsible for the little girl’s death and the injuries that her mother sustained in the accident.

If your family has experienced an injury or wrongful death at an amusement park, contact a personal injury attorney as soon as possible.

The St. Louis Personal Injury Attorneys at the Zevan and Davidson Law Firm have recovered millions of dollars for their clients in both Missouri and Illinois. Call us today at (314) 588-7200 for your free consultation.

Although one of the oldest professions in human history, farming remains one…Read