In some cases, prescribing prescription medications without properly evaluating a patient can be considered medical malpractice. 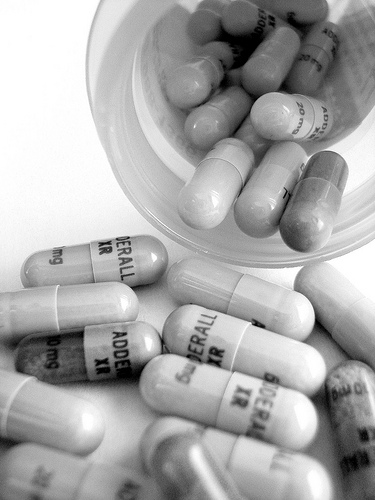 Rocky was able to get a prescription for Adderall by going into a walk in clinic and telling the doctor there that he liked the drug and it improved the way he felt. Adderall is a stimulant that can help some people with ADD or ADHD concentrate, but getting a prescription has become easier and easier. Rocky says that his Adderall addiction landed him in jail more than once.

After hearing from some of his friends about the benefits of Adderall, Rocky was able to easily obtain a prescription for the drug without undergoing any sort of evaluation for ADD or ADHD. He said that for about six months there were no problems and the drug did improve his life by helping him to lose weight. He was taking 20 milligrams of Adderall a day and feeling pretty good. But suddenly all that changed. Rocky said that he stopped being able to sleep, his mind was racing, and he became paranoid that people were in his house. He called 911, but when they arrived they arrested him. He was jailed for two days since the police suspected he was on drugs. While he says he was acting and feeling totally crazed after the two days in jail, during this time nobody did a mental health evaluation. After the two days he was let go.

Rocky said he continued having these psychotic episodes. “I didn’t realize the nature of Adderall bipolar mania. During a manic episode, you don’t realize that you are having an attack. I thought I was making magic: I was remembering past lives and becoming enlightened.” Next, he lost his job as a waiter and needed to file for unemployment. He was jailed for two more days for lewd behavior around this time and his friends decided he needed an intervention. That, however, did not work. During the intervention Rocky’s behavior alarmed his friends so much that they called the police.

Police arrived and Rocky was handcuffed, shackled, and taken to jail. His hands turned blue from how tightly his hands were restrained. He was charged with public urination and spent 30 days in jail. He says he was not guilty of the charge but was forced to plead guilty or spend another month in jail. He did plead guilty and got four days.

After being released, Rocky tried to get more Adderall, hoping it would calm him down. The doctor who initially prescribed the drug denied his request, however, saying that because he did not refill his prescription on time he broke the agreement. He would not treat Rocky any longer.

Eventually, Rocky’s family had him committed to a mental hospital but he would not take the medications doctors prescribed and he physically assaulted an orderly. The police came and this time Rocky needed legal advice. He then went into a serious depression. He and his attorney believe that along the way Rocky’s mental illness should have been addressed long before he assaulted the orderly, which was a felony.

Rocky says, “Needless to say, my quality of life is diminished and I have gained 100 pounds. I am now in counseling, and because I had this reaction to Adderall, I have been diagnosed as bipolar. I am lacking confidence in myself and constantly worried that if I have another attack I would wind up back in jail. I have grounded myself, but who knows for how long?”

Before electing to have cosmetic surgery, you should be aware of the…Read