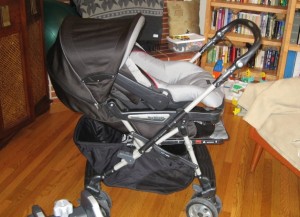 Baby stroller manufacturer, Peg Perego alongside the US Consumer Product Safety Commission (CPSC) has announced a massive recall involving hundreds of thousands of strollers in the wake of a reported death by strangulation of a six month old baby.

According to the press statement given by Peg Perego, the voluntary product recall is undertaken on at least 223,000 baby carriages across the nation, affecting dozens of Pliko-3 Stroller models and several from Venezia Strollers. The company further warns the public that these products are still sold in secondhand stores and thrift shops nationwide.

The first report came from Tarzana, California where the six-month old boy’s head was trapped between his stroller’s cup holder and his seat. He was strangled to death. Similarly, a seven-month old girl was trapped under the like circumstances but she was freed in time.

Peg Perego has stressed that the risks of strangulation or entrapment increase exponentially when the child is not harnessed. Affected units can be best identified as those having only one cup holder. Other units where there is a bumper bar or two cup holders present no similar risks. A stroller’s model number can be identified on the label sewed at the back of Pliko-3 units while the same number may be found Venezia’s foot boards.

Although the products have been made in Italy, various online retailers such as Amazon and Target have distributed these from January 2004 up to September 2010. As part of the recall, the company has advised consumers not to return these to the retailers as they do not have the necessary repair kit. Instead, buyers may contact Peg Perego directly (888) 734-6020 or through their website.

It is prohibited under Federal law for recalled products to be sold or distributed. Subsequently, it is also illegal to sell products that aren’t safe, those with inherent manufacturing defects (like these Peg Perego strollers) and those that fail to warn of possible hazards. This branch of law is called product liability.

*not the stroller necessarily recalled

Product liability, sometimes referred to as products liability, is an area of…Read