You are on your way to work and the radio reports a jack knifed trailer blocking traffic on the highway. 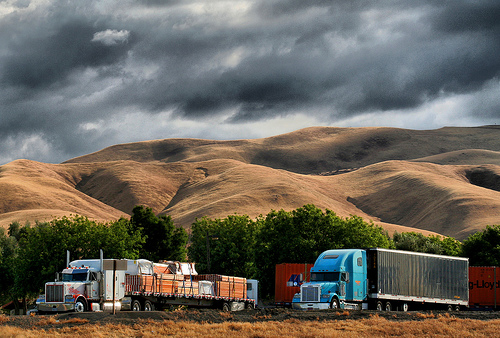 This is when the cab of the truck turns in on the trailer resembling a jack knife that is about to close. When this happens on an open highway it can cause damage to multiple cars and motorists. The momentum of the swinging trailer can literally sweep a car out of its path. Once the truck does come to a stop, the trailer is almost always sideways across the highway, blocking multiple lanes of traffic. If still attached, the cab will be facing in the opposite direction making it impossible to move the truck out of the way. On a busy freeway this can cause a pile up of cars as they collide with the trailer and each other. If you have ever been hurt by an accident with a jack knifed trailer, ask a Missouri truck accident attorney what your rights are.

“How Did That Happen?”

Attempting to brake too fast is the leading contributor to a jack knifed truck. As the cab suddenly decelerates, the trailer can hit it from behind and cause the driver to lose control. The trailer begins to move to one side and the cab into it. Any number of things can cause this to happen, but the most common cause is driver inattentiveness. They fail to notice the flow of traffic slowing down around them until it is too late. It is not uncommon for a truck to jack knife just before a road side construction site or the scene of another collision. Faulty brakes may also be to blame. Most trucks are equipped with a hand controlled trailer brake. Over use of this can cause it to become useless unless it is promptly replaced. A truck driver may be depending on that brake to slow down the trailer as he brakes the cab, only to find out that it is no longer functional.

A Series of Accidents

An 18 wheeler that suddenly jack knifes on a highway can catalyst a series of accidents, most of them causing serious injury to motorists. For example, an 18 wheeler began to drift onto the shoulder. The driver over corrected his mistake which caused his tractor to jack knife and then detach from the cab. The cab left the highway while the tractor laid across it with no lights. A Missouri worker driving a dump truck did not see the trailer in time and collided with it. The force of impact sent the dump truck off of the highway, striking an embankment two times as it spun around. The driver flew through the windshield.

The injuries sustained by the cement truck driver were numerous and life threatening. He spent over 10 months in the hospital and had over 20 different surgical procedures performed. Due to the tractor drivers’ negligence and the extent of injuries involved, the insurance carrier for the trucking company settled the claim against them for $5.05 million.

When Injuries Are Severe and Expenses High

The best defense against colliding with a jack knifed truck is to keep a safe distance from big rigs while traveling on highways. These accidents can start in a split second and if you are too close you will most definitely be caught up in the ensuing mayhem. In the event that you have recently been a victim in a jack knifed trailer incident, call Zevan and Davidson Law Firm at (314) 588-7200. In all likelihood your injuries were severe and medical expenses high.  You deserve some compensation for that.