Mechanical Problems That Can Cause Semi Truck Accidents 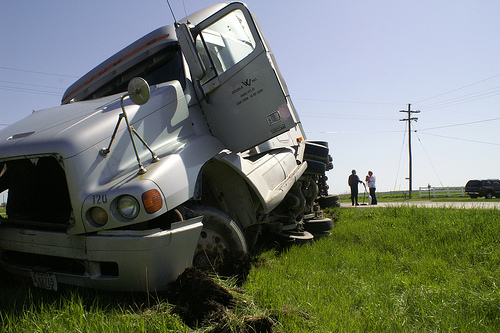 Because we share the road with huge commercial trucks that weigh several tons, we like to think that these vehicles are carefully maintained and regulated, and that safety problems are a rarity.

While it is true that these enormous, heavy vehicles are heavily regulated, when trucking companies ignore or fail to comply, it does put other drivers at risk. The potential for serious accidents that cause devastating injuries is significant.

Some problems like spilling vehicle debris, improperly loaded trucks, mechanical problems, problems with brakes, wheels, or tires, all account for a percentage of truck accidents. The federal Department of Transportation has conducted several studies over the last few years that demonstrate the prevalence of these issues.

A federal report in 2009 looked at the mechanical problems that can happen. These dangerous problems contributed to 4.5 percent of accidents that year. Problems with brakes on any vehicle are frightening, but brake issues with these huge semi trucks are even more terrifying and should be an immediate concern. Yet several studies and reviews of accident data showed that trucking companies will oftentimes ignore these issues, overlooking them in favor of convenience, essentially allowing the vehicles to become a ticking time bomb on the roads.

Brakes were the most common cause of semi truck accidents in a 2006 DOT study. And brake issues were found to be one of the riskiest mechanical problems. Brake malfunctions were also found to be the fourth riskiest problem overall. The first three were speeding, inattention and driver fatigue. A Michigan study had similar findings and also reported that 35 percent of trucks that crashed had safety violations. Inspections should have taken these vehicles out of commission. That study found that trucks that had a braking violation were 50 percent likelier to be involved in braking accidents.

Another hazard with semis and tractor trailers is what can happen when the load in the back shifts during transit. This was found to be the second most common mechanical failure that can happen to a semi vehicle. If the load in a truck becomes dislodged or shifts while it is being transported, it can break loose and drop out of the back of the truck and into traffic. Obviously this can cause a serious accident if the loose cargo hits another vehicle or if the vehicles behind the truck must swerve to avoid hitting the debris. This can set off a chain reaction and and result in a crash involving multiple vehicles.

In addition to debris spilling onto the highway, a load shift can happen inside of the semi truck, causing the weight of the trailer to become unbalanced. When this happens the truck driver loses control of the truck. According to the DOT study, load shifts account for about seven percent of truck accidents. Sudden changes in weight can be very problematic, as these huge trucks do not respond well to this sort of thing happening. In addition, if a trailer is overloaded and is carrying a greater weight than what was intended for the vehicle, the truck can become uncontrollable and overwhelming for the driver, and is easier to roll.

Any issue with the vehicle or with the driver increases the potential harm and adds risk of an accident for anyone else out on the roads, or even pedestrians. Failure to comply with state and federal laws put the trucking company, the driver, or both at fault for any resulting crash. Trucking companies must take reasonable care for the safety and well being of other drivers.

If you were involved in an accident involving a truck, and believe that the accident was caused by an unsafe move by a trucking company, you should contact a Missouri truck accident attorney. Frequently these accidents can be devastating, cause catastrophic injuries, or even be fatal for one or more drivers. An experienced truck accident attorney can help you to get the compensation you deserve to cover medical expenses, any injuries or property damage that resulted from the accident.