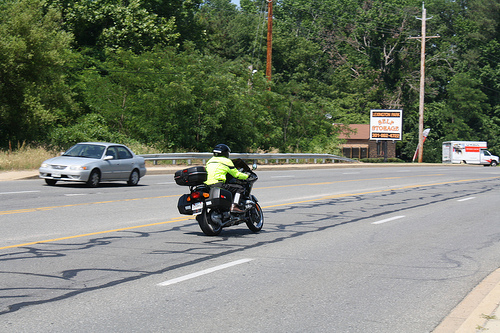 Lopez was on duty, traveling southbound on Lexington Avenue, preparing for the Memorial Day Parade in Mount Kisco, according to police reports. Lopez was about to turn into the St. Francis Cemetery. A the same time, and 84-year-old driver was heading northbound on Lexington, but he drifted into the southbound lane, and he collided with Lopez.

Lopez was thrown from his Harley Davidson bike. Thankfully, the injuries he sustained were not life threatening. He was treated at the hospital and later released. Police say that the man driving the car was not injured in the accident.

Police determined that alcohol and drugs did not contribute to causing the accident.

Another accident in Ogden, Utah was fatal for a motorcycle shop owner.

The accident occurred near Washington Boulevard at the end of May.

Deyne Stocker, 24, was the owner of a custom Harley Davidson motorcycle shop, located just north of Salt Lake City. He was riding his bike on Washington Boulevard when he crashed with a sports utility vehicle just before 9 p.m. In the collision and impact, Stocker was ejected from his motorcycle and smashed into a tree.

He sustained very serious injuries in the crash and though he was immediately rushed to a local hospital, he was unable to recover and later died.

The driver of the sports utility vehicle was not injured in the collision.

Stocker had a business partner, Adam Paul, who said that Stocker’s custom motorcycle designs were extremely popular and well known in the area, and because he was so involved in the business, without him the future of the business could now be in jeopardy.

Drugs or alcohol do not appear to be a contributing factor, police say, but it does appear that Stocker was speeding at the time of the accident.

These accidents can cause catastrophic injuries or death and the recovery process can be long and extremely stressful. Medical bills add up very quickly, you may miss days, weeks, or even months of work days due to your injuries, and experience pain, suffering, and emotional distress following the accident. Your attorney can assist you in recovering damages relating to these losses and to seek justice in holding the responsible parties accountable for their actions.

Contact the motorcycle accident attorneys at the Zevan and Davidson Law Firm for a free consultation.

However, a motorcycle drivers greatest threat is other drivers.  Early one morning…Read