It is believed that in over 60% of medical malpractice claims involving a radiologist, the negligence is found to be that the doctor was never informed of the results. 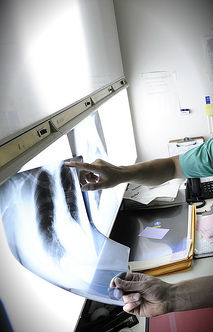 The radiologist role in a patients care is often overlooked in medical malpractice suits, but as their part in patient care has grown over the years so has the amount of claims of negligence against them. Just last winter a New York jury found a radiology group solely liable for a patients’ partial paralysis and awarded him $2.1 million. They also found that the other named defendants bore no fault in the claim. The failure to notify the attending physician of results obtained from a CT scan led to a two week delay in treatment and caused more damage to the patients’ health. If you have experienced a similar situation, contact a medical malpractice attorney to see if your injury warrants filing a claim against your radiologist.

One role that a radiologist may play in your care is interpreting a scan and relaying their findings to your physician. An average of 4% of their daily interpretations contain errors. Fortunately most of these errors are minor or corrected before it causes harm to the patient. However, just misreading a scan does not constitute negligence. An attorney should be able to help you determine whether it was human error or medical negligence.

For any medical professional to be found liable, or guilty, of medical malpractice four essential elements are typically established.

Proving how the radiologist knowingly did not follow proper procedure or protocol is the foundation of a medical malpractice suit.

The role of the radiologist is an important one. They are able to see what your physician is unable to with the naked eye. If they are unable to properly read what they see or get that information to your physician in a timely manner your health may be compromised.

Interventional radiologists have undergone further training and may also perform image guided minor surgeries. For example, the radiologist of a Missouri patient was using ultrasound to obtain a liver biopsy. During the procedure one of her ducts was perforated yet went unnoticed until the patient started to experience abdominal pain. She nearly died from a developed abscess and internal bleeding. A claim was made against the radiologist and was settled. Nicking the duct was an associated risk with the procedure, the negligence was failing to notice the mistake and repair it.

Failure to communicate results is overwhelmingly the number one cause of radiologist negligence such as in the before mentioned New York case. It is believed that in over 60% of medical malpractice claims involving a radiologist, the negligence is found to be that the doctor was never informed of the results. In instances involving such medical emergencies as aneurysms or tumors, delaying treatment can seriously hinder a patients’ prognosis or even cause their death. Cases such as these often absolve the attending physician of any fault and the responsibility is shifted entirely onto the radiologist.

Proper patient care is not just limited to your physician. If you or a loved one has suffered a disability and believe that your radiologist contributed to it please contact a St. Louis medical malpractice attorney at the Zevan and Davidson Law Firm immediately. Our team of legal professionals have been standing up for the rights of medical malpractice victims in Missouri and Illinois for over 20 years. We have a proven track record of obtaining favorable verdicts for our clients.