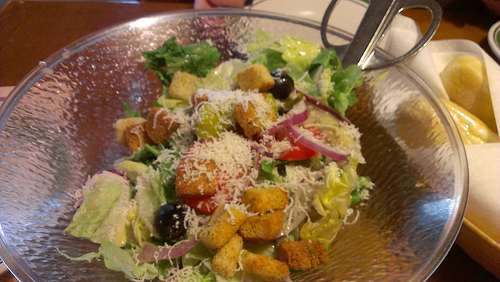 Salad mix from Mexico that has been served in two separate restaurant chains in recent months have apparently been making people ill all across Nebraska and Iowa. Additionally, over 400 people across 14 other states reported being affected with food poisoning from the same cyclospora outbreak. However, it has not been determined how many of these cases can be attributed to the same salad mix.

The Olive Garden and Red Lobster food chains were supplied the salad mix by Taylor Farms de Mexico, a food industry produce supplier. The restaurant chains are owned by the Orlando-based Darden Restaurants. A spokesman for Darden stated that he has never before had any problems with the supplier, saying has not heard of any previous cases of illness or food poisoning or had any other concerns about Darden. The FDA investigated the food poisoning outbreak in Nebraska and Iowa and traced the root of the problem back to one of the Taylor Farms facilities in San Miguel de Allende. Thankfully, out of Taylor’s 12 facilities, this was the only one connected to the outbreak in illness.

The plant is located 180 miles north of Mexico City, and according to the chairman and CEO of Taylor Farms, Bruce Taylor, at the time of the cyclospora outbreak the plant had produced 48 million salad servings. By June, when the reports of illnesses began, these packages had been sent out to thousands of restaurants spread across the Midwest and the eastern United States. Taylor also reports that the FDA is continuing its investigation and the plant is working with them to help.

The CDC has been careful to stipulate that packages sold in stores have not been affected or contaminated and that there have been no instances of illness associated with these packages. Iowa has reported 146 illnesses, while Nebraska has reported 81. There have also been 113 reported cases in Texas. While the most recent illness was reported on July 23, it has not been publicly linked with a location. Another three cases were confirmed by the CDC on August 2, but a connection with the salax mix has not been made.

Cyclospora is a parasite that is pretty rare. It can cause significant damage to the gastrointestinal system. Infections of cyclospora are usually found in either tropical or subtropical countries. The Mayo Clinic relates that the parasite can be contracted through drinking water or eating contaminated food. But cyclospora cannot be transmitted through person-to-person contact. Symptoms include severe stomach cramps, diarrhea, and nausea, but are delayed for about a week. The symptoms can last as few as a few days, but can linger for a month if the infection is not treated. Others who are infected do not demonstrate any symptoms at all.

Diagnosing cyclospora is done by taking a stool sample. Washing your vegetables and your fruits from packaged produce with washing mixes, or even using vinegar and water, can drastically reduce the chances of getting the infection through contaminated food.

If you have eaten contaminated food or suffered food poisoning or other gastrointestinal illness as a result, you may be able to file a personal injury lawsuit and recover damages relating to your illness. If you have any questions about a food poisoning case, contact a St. Louis personal injury attorney at the Zevan and Davidson Law Firm for more information about your legal rights.