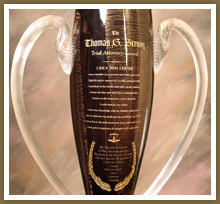 Zevan is the recipient of the 2010 Missouri Association of Trial Attorneys’ Thomas G. Strong Trial Attorney Award. The honor is given annually to the Missouri trial attorney who best exemplifies the qualities of professionalism, character, courtroom success and ethics.

If not for a 10th-grade spin on a carnival Whirly-Bird ride during which Dave Zevan discovered his unfortunate lack of intestinal tolerance for velocity combined with aerodynamic drag, the native New Yorker might have gone on to become a Navy fighter pilot.

“Flying jets was my dream,” Zevan says, “but I threw up everywhere when I got off that ride.”

That turn of events, coupled with some sage advice from his father, prompted him to table his ambitions of attending the U.S. Naval Academy at Annapolis and piloting jets from the decks of aircraft carriers. Yet, even with flying out of the picture, Zevan still considered a career in the military as a member of the Navy’s Judge Advocate General Corps, eventually opting instead for a degree in history/political science from the University of Scranton and a law degree from St. Louis University.

Now, so many years removed from that memorable carnival ride, Zevan is arguably one of the most successful medical malpractice attorneys in the state of Missouri, and he knows the path he found was the right one for him.

“I know I’ve made a difference,” he says, solemn and in a way you can tell it matters to him. “I know I’ve effected change.”

A working class guy who descended from Russian Orthodox farmers and coal miners in upstate New York, Zevan has made good. Seated with his wife Rhonda in the conference room of the St. Louis offices he shares with partner Kevin Davidson, the trial attorney who “never thought he’d stay in St. Louis” talks about his life and work.

In law school he clerked for plaintiff’s attorney and MATA Executive Committee member Ken Vuylsteke, where, according to Vuylsteke, he so impressed all those with whom he worked that Zevan was sought out for a position with the city counselor’s office of St. Louis. He spent several years there “under the wing of Jack Fitzgibbon” and then had a short stint in a plaintiff’s firm before eventually opening his own firm and joining forces with law school classmate Davidson. He married Rhonda, with whom he has three children – Nikolai, 13, Anastasia, 11 and Peter, 7.

When not working, Zevan enjoys traveling with his family, the passionate study of history (he has begun collecting Native American artifacts found on his farm), and the simple act of working the black Angus cattle on the farm or going on a hunting trip, sometimes with his kids tagging along. He even makes time to serve as Assistant Scoutmaster for Boy Scout Troop 322, of which son Nik is a member.

In effect, life is pretty much going according to plan, even if it’s Plan B and there isn’t an aircraft carrier in sight.

Except for one little glitch.

What appeared to be a swollen gland was treated with a few rounds of antibiotics before Zevan eventually had a biopsy and was handed a diagnosis of non-Hodgkin’s lymphoma in June 1998.

His immune system kept the disease at bay for seven years, said Zevan, who came to view his cancer as a Damoclean sword. He knew the blade would eventually fall, and when it did, it meant a rigorous cycle of chemotherapy treatments and an eventual stem-cell transplant.

There were computed tomography scans too numerous to count and days spent hooked up to intravenous therapy, followed by nausea and weakness and sure, maybe the tiniest bit of self-pity, albeit short-lived.

“Early in my diagnosis I was seeing some specialists in Michigan and was really feeling down so I took a walk and wound up going past the pediatric ward,” he said, shame creeping into his voice. “I never again felt sorry for myself.”

It was a tough period during which he called on colleagues to come to his aid. Old friends Tom Stewart and Spencer Farris joined Zevan & Davidson and were a big part of keeping things running at the firm.

“I knew I had to keep this place going and I found myself getting tremendous support. I’m indebted to Tom and Spencer; they were a big part of my support system,” Zevan says. And he can’t say enough about the loyalty Davidson has shown. “The pressure he’s been under was just unbelievable during my cancer treatment.”

He was able to gain traction against his illness, entering remission thanks to the treatments, and he also gained some philosophical insight that he uses with his clients and in his family life.

“I’m able to hear what (my clients) are going through and have a level of understanding that not every attorney will have,” he said. In fact, instead of succeeding in spite of his illness, Zevan sees his achievements in part as a result of it.

When he talks about wanting to make a difference, Zevan is talking about the kind of work his firm does for people like Suzanne and Dewayne Blankenship, whose infant son Dylan died as a result of medical malpractice. Because of Zevan and partner Davidson’s work on that case, the jury awarded the Blankenships a $6 million verdict.

Jones V. Talcherkar, M.D. (Circuit Court of Macoupin County (Ill.), Cause No. 2002-L-1, verdict $3,104,695), is another example of the firm producing unexpected victories in counties where even small plaintiff’s verdicts are rare.

Rhonda Zevan chides her husband gently for his inability to say “No,” but knows that he has a need to make a difference; to have a purpose.

She also recognizes her husband’s cancer as a part of their lives; an ever-present “shadow.”

“It’s just always there,” she says. “Some days it’s a bigger shadow than others.”

And she recognizes why Zevan credits that shadow as spurring him to achieve, to do, to accomplish. “I would not have this perspective if it weren’t for her, the kids and the cancer.

“It makes you appreciate the things you might not otherwise,” he said, smiling slightly. “We know that.”

Davidson points to Zevan’s apparent inability to give quarter on any level and marvels.

“When a person going through what he was would rightfully and rationally say, ‘I understand my clients need me but I can’t be there right now,’ he was there,” Davidson said. “He went for chemo on Day 2 of a trial and was back at 8:30 in the morning on Day 3. And he wasn’t just there, sitting on the back row, observing. He was there actively participating, questioning witnesses, doing whatever had to be done.”

Zevan said he feels, if not a need to protect, then a desire to shield his family and colleagues because “they’re all going through this too. It’s made us much closer. I know I wouldn’t be as successful without the support of all my family and my hardworking partner. It makes my time very valuable. When you feel you’re living on borrowed time, you’re more judicious with it.”

“He doesn’t want to make me upset,” Rhonda agrees. “But we all have it. At the same time, we’ve got a great marriage, three great kids, a wonderful way of life. We are super-blessed.”

Cancer “made another go” at Zevan late in 2009, and he just completed another cycle of chemotherapy. In fact, when he got the telephone call from MATA President Alan Mandel about winning the Strong Award, Zevan was at Barnes Hospital about to endure his final round of chemo.

“I think it’s a great honor and he deserves it,” chimes in Rhonda. “There’s a drawer at home full of letters that tell me why – they’re from people whose lives he’s affected for the better. In fact, those really mean more than any award ever could.”

Says friend and former partner Stewart, “Dave exemplifies each of the characteristics as evidenced by the esteem he is held by the judiciary and the numerous cases referred to him by defense counsel throughout the state.”

Vuylsteke, who remains close with Zevan and his family, agrees, in spite of the running joke between them that Vuylsteke will continue to introduce Zevan as his former law clerk. “He’s very deserving of the award,” he said. “When he was younger he used to call me for advice on cases. Now I call him.”

Says Zevan, who is back in remission, “You’ve got to feel like you’re doing something. I don’t know why I have this (cancer), but I definitely believe that things happen for a reason. There’s a reason I’ve been allowed to come back. It’s not yet my time.”

"Zevan, who specializes in medical malpractice lawsuits, said that other consumers…Read