The Catastrophic Consequence of Truck and Motorcycle Collisions

As frightening as the thought of a truck accident with a passenger car, imagine an 18,000-pound semi versus a two-wheeled motorcycle. 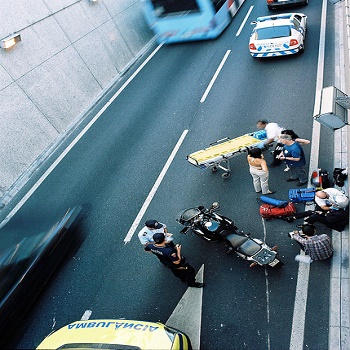 Both types of vehicles have their own unique design issues that put them at larger risk for accidents. Together on a highway this can be catastrophic. The best a motorcycle driver can do is to try and stay as far away from a large truck as possible while out on the road. Many truck and motorcycle accidents will end with a fatality. If you have lost a loved one due to an accident with a large truck, a Missouri motorcycle attorney can help you file a wrongful death claim. Statistics show that most truck accidents are the result of negligence, and if that is the case for your loss, you have a right to be compensated.

Just in the last half of 2013, at least four major stories made headlines where a motorcycle driver or passenger was killed in a collision with a truck. The first and most tragic, happened in California back in August. A motorcycle, with a four-year-old passenger on the back, collided with a semi that was making a U-turn. The truck driver did not even realize that the accident had happened and ran over the little girl, causing her death. It is believed that the driver of the truck was negligent in not signaling before starting the maneuver.

Here in Missouri a man was killed when a large truck blew through a stop sign and collided with his bike in mid- September. His passenger and the truck driver both suffered from severe injuries. Just a few weeks later in New Jersey, a motorcyclist was killed when a tractor trailer moved into his lane on the turnpike. Lastly, in late November a couple was killed in Florida after hitting a garbage truck.

The Main Cause of These Collisions

There is a valid explanation for the number of accidents between trucks and motorcycles. Trucks have the disadvantage of poor visibility due to the number of blind spots for the driver, and motorcycles, because of their small size, are harder to spot. The fact that each accident involved at least one fatality goes to show the catastrophic effects of these types of accidents. Since most involve negligence on behalf of the truck driver, you can expect to see large settlement amounts like the $1.9 million the family of a Missouri mother received after she was killed when her motorcycle was struck by a concrete truck.

Lawyers know that there is no monetary amount that can make up for the loss of a treasured family member. We also know that such a loss can put them in financial distress. For this reason it is encouraged that family members who have lost a loved one in an accident speak with Zevan and Davidson Law Firm at (314) 588-7200 before deciding to let the matter go. In addition to funeral expenses, your family may also be losing an income plus the companionship and guidance that a loved one offers. You do have the right to be compensated for these losses.

There have already been many motorcycle accidents in Missouri this year. And…Read