The Ramifications of Having an Aortic Dissection Misdiagnosed

An aortic dissection involves the aorta, the main artery that carries blood away from the heart. 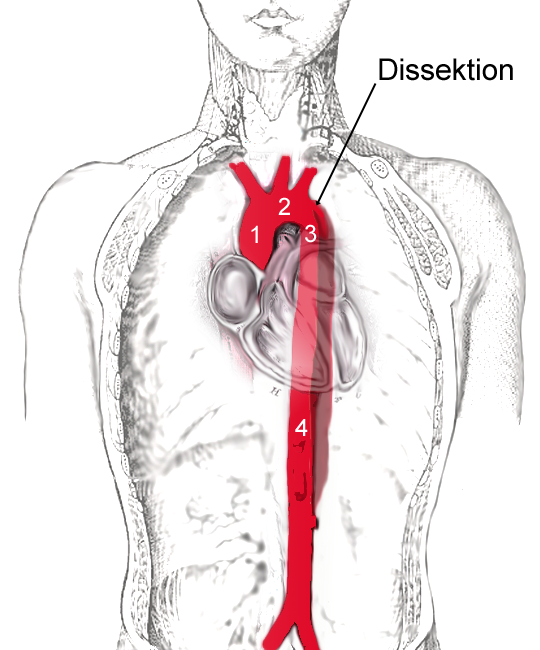 The walls of the artery separate or tear causing bleeding into the wall of the aorta. Blood pools and pressure gets applied to smaller aortic arteries reducing blood flow. It is a life threatening condition that requires immediate surgery before the aortic artery ruptures. Over 50% of patients whose aorta ruptures die as a result. Having it diagnosed immediately is critical.

Studies have shown that almost a third of patients suffering from an aortic dissection will be initially misdiagnosed with cardiac infraction or other heart related diseases. Failure to diagnose immediately can lead to other organ damage, stroke, damage to the aortic valves and death. It is imperative that emergency room doctors and cardiac specialists have a high level of suspicion for this disease. If you were initially misdiagnosed, gather all of your medical records and bring them to a medical malpractice attorney. Their experience in misdiagnosis negligence will help you determine if any pain you may now have could have been avoided with an earlier diagnosis.Symptoms of aortic dissection usually come on suddenly. Severe chest pain, much like a heart attack, if often experienced. The pain will radiate to different parts of the body. Differences in blood pressure may be noted in the arms and legs or even from the left to right arm, and abnormal sounds over the aorta might be heard such as a murmur. The only way to positively confirm an aortic dissection diagnosis is with imaging such as a CT scan, MRA or TEE.

The worst possible result of this type of medical negligence is the death of the patient.

If the aorta ruptures before the proper diagnosis is made they stand a less than 50% chance of surviving the surgery. For those lucky enough to survive, they face continuing treatment of high blood pressure and frequent scans of the aorta for the rest of their life. A medical malpractice attorney can help you determine your future costs as a result and see to it that you are compensated for them.

The family of a Missouri man who died as a result of not having his aortic dissection diagnosed immediately settled their wrongful death lawsuit against the doctors and hospital for 2 million dollars. He presented with symptoms on a Friday and was admitted. Scans were ordered by the physician but put off until Monday. Sadly he passed away Saturday evening before the tests were ever performed. The initial cause of death was cited as complications due to coronary artery disease, but 18 months later, after a post mortem autopsy was performed, aortic dissection was confirmed.

Numerous studies have been done recently that show just how critical early diagnosis of aorta dissection is to the welfare of a patient. Experienced medical malpractice lawyers will be up to speed on all of them and should be consulted with immediately if you or someone in your family has suffered needlessly as a result of it not being diagnosed properly.

To speak with a St. Louis Medical Malpractice Attorney at the Zevan and Davidson Law Firm, call us at (314) 588-7200 or contact us online. With over 20 years of experience and a proven track record of successful results, we can evaluate your case for free and begin building a strong case for you and your family.

When Cancer is Initially Misdiagnosed

Diagnosing cancer as early as possible is crucial. Americans were shocked this…Read