When Airbags Hurt People Instead of Saving Their Lives

Airbags are intended to save lives. 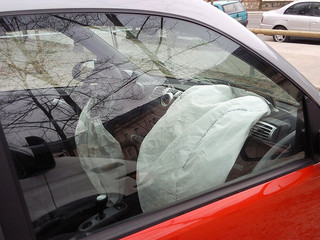 So what happens when they actually put drivers and passengers in danger, instead of protecting them?

People have had problems with airbags either deploying too soon or not deploying at all, both of which can cause serious injuries or even be fatal. Some injured drivers and passengers have filed lawsuits and some companies have issued recalls after injuries were reported. As an important safety device, people should be able to count on their airbags to deploy and protect them in the event of an accident.

One woman died in an accident that happened on May 3, 2011. After the woman was rear ended in her 2000 Ford Explorer XLT, she was allegedly thrown from the vehicle. Apparently this was due to defects in both the seatbelt she was wearing and the airbags in her vehicle. Her husband has filed a wrongful death lawsuit  in the Circuit Court of Mason County, West Virginia, against Ford Motor Co.

When  a problem is discovered with airbags, a vehicle needs to be recalled. Technology may be becoming more sophisticated, but unfortunately this means that there can potentially be more problems that can arise. According to the National Highway Traffic Safety Administration, Volvo needed to recall 17,000 cars in 2012 due to loose wiring in the airbags that could either cause them to not deploy at all in the event of an accident, or deploy incorrectly. It looks as though the problem was with the wire harness which attaches to the seat frame. It was not fastened securely enough, meaning that in the event of an accident it is possible for the seat to detach when the seats were moved.

Recalls need to be issued in order to keep consumers safe. Additionally, recalls protect manufacturers from mounting numbers of lawsuits. It is in everyone’s best interests that the product that was produced actually performs the function that it is purported to perform and that consumers paid for.

In 2013 there was a recall of around 185,000 2011-2013 model Hyundai Electras because of a problem with the support brackets in the vehicle. According to the National Highway Traffic Safety Administration, whenever the side airbags deployed these headliner support brackets could loosen and hit the occupant of the vehicle, which could be very likely to result in serious injuries.

When an airbag fails the results can be devastating. Airbags that deploy incorrectly can cause just as much harm. An airbag that deploys prematurely or when someone is driving could actually cause a car accident. Imagine trying to safely maneuver your vehicle as it’s airbags deploy. And if the airbags deploy even a moment too late, they are useless and can harm the vehicle’s occupants. Airbag technology operates under the assumption that the occupant is a certain distance from the airbag. If a person if not in that position when the airbag deploys, it can cause very serious injuries.

If you have experienced an accident or incident  involving a faulty airbag or other defect, contact the St. Louis Product Liability Lawyers at the Zevan and Davidson Law Firm.

To schedule a free consultation, call Zevan and Davidson at (314) 588-7200 or fill out our online case evaluation form.